A downloadable game for Windows

"I’m a 90s kid who didn’t get the chance to know the fantastic 80s. Starxium 20XX is a tribute to those fantasized years when everything seemed just fine, with lots of vibrant colors, bright neons and dreamy synths."

Disclaimer: the version on itch.io is a pre-alpha demo version. The game is actually raising fund on kickstarter. Check it out if you like the game! You may also want to visit the website as there's every social network links)

The only purpose of this demo is to discover the gameplay of Starxium 20XX. It's not optimized, probably full of bugs and missing 95% of the features of the final game. Just enjoy your play, don't be too picky on the current state of the game, and remember it's just a free pre-alpha demo :)

Starxium 20XX is a capture the point (your team needs to stay on a point and repel your opponent), where the point is a moving convoy that runs at 200km/h in the middle of a big highway. It's not a racing game.

The game is highly reminiscent of the 80s with its neon lit nights and boasts original synthwave music. Its strong visual and sound identity allow the game to be appreciated by a growing community of retro lovers who crave the 80s pop culture.

It is a multiplayer game meant for esport: it’s made to be as fun to play as it is to watch. The main game mode is played with 4 players versus 4. You'll need some strategy and good communication to fight the enemy team.

Everyone gets the same car but what you do with it is your business. And you can totally customize it, not only the skin, but everything from the wheels to the motor, from the chassis to the battery, and so on. Each part comes from one of the 27 country manufacturers.

To repel your opponents, you can simply rush over them. But to be more efficient, you can charge your battery by doing aerial tricks and use it to display "hologram" such as a bumper that return 5x the force of the collision to an opponent, or a jumper that allow your teammates to go on the other side of the convoy.

You just have to unzip and launch! You can play with up to 16 players and up to 8 teams. If you want to try the multiplayer, you'll need to have Steam launched. Otherwive, you still can drive alone with the freeride mode. 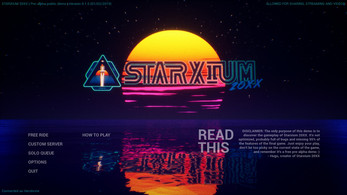 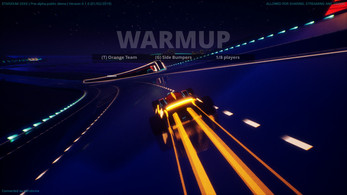 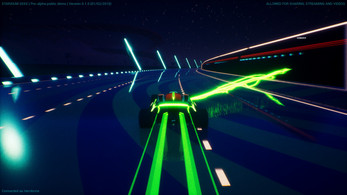 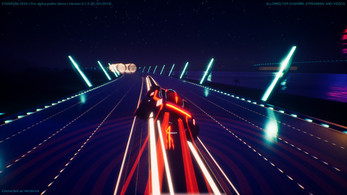